Be the first to review this product
€550.00
In stock
SKU
Willem de Ridder - Fantasio (1968) Opening poster
Add to Wish List

Opening poster for Fantasio, a key underground club in The Netherlands 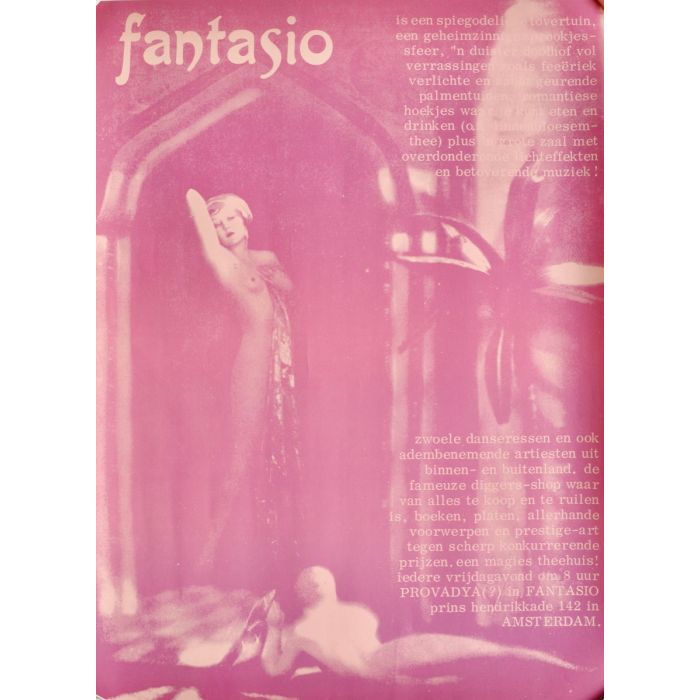 Willem de Ridder - Fantasio opening poster. Opening poster for one of the most important Amsterdam Youth Centers. According to Marjolein in Hitweek Vol. 38 # 01 (2003; issued at the Hitweek exhibition in Breda) the posters for the openings of Fantasio and Paradiso were both designed by Willem de Ridder. Fantasio opened March 29, 1968, one day before the opening of Paradiso (March 30, 1968). They are both on pink paper stock.

Fantasio - When it seemed in the first months of 1968 that the club Paradiso was really going to happen, the editors of underground magazine Hitweek became increasingly negative regarding the proposed content of the center and the involvement of underground organization Provadya? Secretly, the Provadya? group went in search of another location to realize its own plans. The group's eye fell on a huge building on the Prins Hendrikkade where the Anker-clubhuiswerk Foundation had just started a major project for the notorious problem youth who regularly caused disturbances around the Central Station. When the Provadya? group proposed to renovate the building, to breathe new life into it and thus provide space for the 'hard to receive youth' of the entire city, the managers of the building reacted enthusiastically. With the help of a Provadya? audience, including masons, electricians and carpenters, the building was converted and painted over in two weeks. The municipality was not involved in the plans, the Anchor continued to be subsidized by the government. On March 29, 1968, a day before the opening of Paradiso, the youth center Fantasio was opened.

It turned out to be a double celebration for the Provadya? group in the last weekend of March, when she had settled her conflict with the municipality and thus also got a big finger in the pie at Paradiso. In one weekend two centers were opened for the unorganized youth with a combined capacity for three thousand visitors. According to Hitweek, the start of a 'new era'. Provadya? organized the evenings in Fantasio on Friday and Paradiso on Saturday and created a multimedia spectacle at both locations with beat music, DJs, light shows, dance shows, film and theater. In the months and years that followed, both centers could count on several thousand visitors a week.

According to Marjolein in Hitweek vol. 3 no. 1, issued at the Hitweek exhibition in Breda in 2003, the opening posters of Fantasio and Paradiso were both designed by Willem de Ridder, editor and founder of Hitweek.

Over time, more and more people also saw a spiritual function for youth centers. Under the influence of Ruud Tegelaar, Willem de Ridder and others this resulted in the transformation of Fantasio into "spiritual relaxation center" De Kosmos in 1969.

Willem de Ridder - In 1962 Willem de Ridder (1939) founded, together with others, the Mood Engineering Society (MES) aimed at establishing a theater form in which the audience participated. He was an important artist in the Fluxus movement founded by George Maciunas. With Peter J. Muller he founded the pop magazine Beatbox and in 1965 the first Dutch underground magazine Hitweek. He was a co-editor of the underground sex magazine Suck. Willem de Ridder was instrumental in the establishment in 1968 of the Amsterdam youth centers Paradiso and Fantasio (which later became the spiritual center De Kosmos).