Be the first to review this product
€175.00
In stock
SKU
De New Babylon no. 1
Add to Wish List 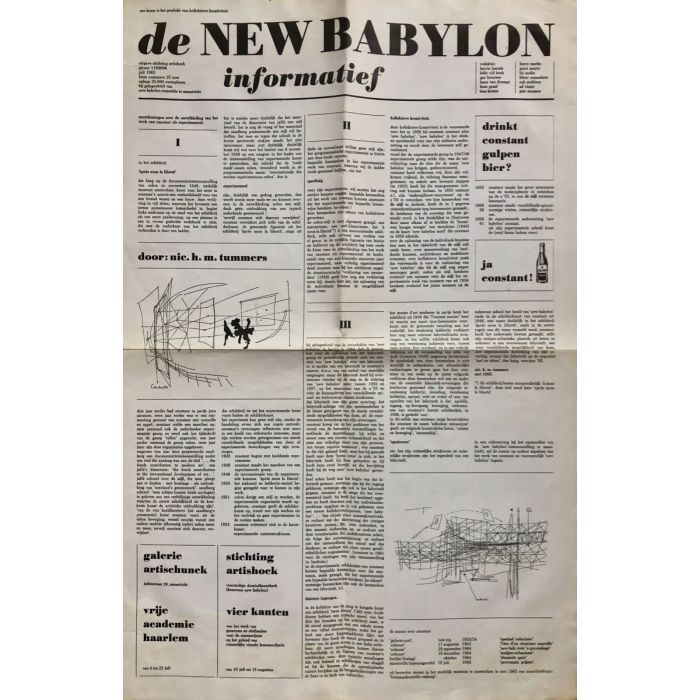 Harry Bartels et al. (Eds.) - De New Babylon Informatief no. 1. Publication devoted to Constant Nieuwenhuys' New Babylon. This issue was published on the occasion of the Babylon exposition in Maastricht from July 15 - August 15, 1965.

November 8th 1948, the Cobra group is founded in Paris. Cobra is a partnership between the ‘Dutch Experimental Group’, the Danish ‘Høst group’ and the Belgian ‘Groupe Surréaliste Révolutionaire’. The name CoBrA is a derivative of the three cities where the groups originate from: Copenhagen, Brussels and Amsterdam.

In 1958, after leaving the COBRA movement, Constant joined the Situationist International, which he left again in 1960. Around 1958, he abandoned painting to devote himself exclusively for eighteen years to New Babylon, a radical illustration of Guy Debord's “unitary urbanism”. His utopian planetary city project, anticipating the research of Yona Friedman and radical groups like Archigram, became a benchmark in the architectural imagination of the 20th century.